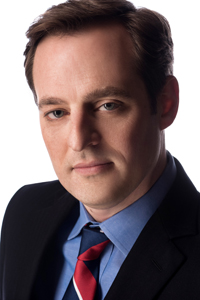 The Pulitzer Prize-winning journalist Charlie Savage is a Washington correspondent for the New York Times and a contributor to MSNBC. He specializes in national security and legal policy issues.

Savage’s first book, Takeover (2007), is an investigative history of the Bush administration’s efforts to expand presidential power after the 9/11 attacks. It shows how that agenda traces back to Dick Cheney’s formative experiences in the Nixon and Ford administrations, when the so-called imperial presidency that had grown up during the early Cold War seemed to collapse amid Watergate, Vietnam, and the Church Committee investigation. Savage’s second book, Power Wars (2015), is an investigative history of national-security legal policymaking during the Obama administration. It explores the claim that Barack Obama, defying expectations, often ended up “acting like Bush” on counterterrorism and other security-related matters.

A member of the steering committee for Reporters Committee for Freedom of the Press, Savage has also been a Knight Foundation journalism fellow at Yale; a public policy fellow at the Woodrow Wilson International Center for Scholars; and a Salzburg Global Seminar faculty fellow. He has twice co-taught a seminar on national security and the Constitution at Georgetown University.

Savage was awarded the Pulitzer Prize for National Reporting in 2007. His other journalism honors include the American Bar Association’s Silver Gavel Award; the Gerald R. Ford Presidential Foundation’s Prize for Distinguished Reporting on the Presidency; the New York Public Library’s Helen Bernstein Book Award for Excellence in Journalism; and the Constitution Project’s Award for Constitutional Commentary.

He lives in Arlington, Virginia, with his wife, Luiza Ch. Savage, executive director of editorial initiatives at Politico, and their children.