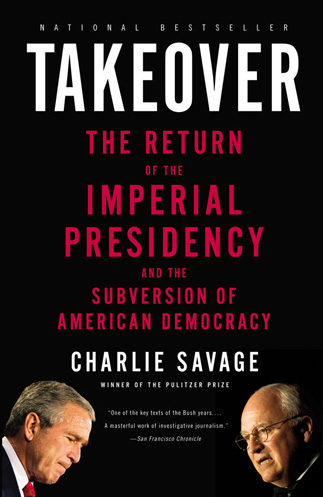 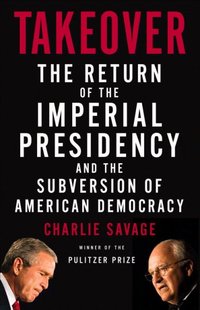 This book as been years in the making. It’s gone through so many revisions, literary agents, and reviews in order to be as fair and accurate as possible. Hailed by liberals and conservatives alike for its revelation of an emerging threat to the checks and balances devised by our Founding Fathers, Takeover is a searing investigation into how a group of true believers, led by Dick Cheney, has seized vast powers for the presidency – and permanently altered the constitutional balance of American democracy.

Takeover unveils the machinations behind the headlines, explaining the links between warrantless wiretapping and recent Supreme Court nominees, between the unprecedented politicization of the Justice Department and the torture debate, between the White House’s use of “signing statements” and its efforts to impose greater control over JAG lawyers. For anyone who cares about America’s past, present, and future, Takeover is essential reading.

Critical Praise and Accolades for Takeover

One of Slate’s “best books of 2007,” cited by senior editor Dahlia Lithwick as one of the “legal books that most changed the landscape this year.”

One of Esquire’s “five best reads of 2007,” cited by contributing editor Charles Pierce as “a sadly comprehensive masterpiece [that] spares nobody.”

“A masterful work of investigative journalism, Savage’s book deserves to be remembered as one of the key texts of the Bush years.”

“Astute and harrowing … important reading … distinguished by his ability to pull together myriad story lines into a succinct, overarching narrative that is energized by his own legal legwork and interviews with key figures… [a] chilling volume.”

“Time was, conservatives relished their role as America’s designated worriers about concentrated and unchecked government power, especially in the uniquely potent office of the presidency. As Charlie Savage demonstrates, there are large new reasons for worrying. With meticulous reporting and lucid explanations of audacious theories invented to justify novel presidential powers, Savage identifies a growing, and dangerous, constitutional imbalance.”

(Also cited Takeover in this Washington Post column and this Newsweek column.)

“Charlie Savage’s Takeover reads like a thriller because it is one: The story of Dick Cheney and his hapless boss pushing the presidency off its constitutional foundation. Savage has placed his well-earned Pulitzer reporting in its larger context, and the report he files in these pages shows how the system is no longer operating in the way it was designed.”

“In clear prose, and with painstaking detail, Charlie Savage tells how political figures in the executive branch have worked overtime to expand their powers -an issue that should be front and center to all Americans, liberal or conservative, who believe in the principles of limited government. His book stands as a sober warning of the Bush administration’s tragic overreaction to the undoubted perils of our troubled age.”

“Until Takeover, no one has pieced together in such readable prose the systematic effort at constitutional revolution pressed by the Bush-Cheney Administration since September 11. With this definitive account, a prizewinning journalist paints a chilling vision of an Imperial Vice-Presidency and the officials who built it. You will not put this book down until Savage snaps the last piece of the puzzle into place.”

“A sobering and significant assessment of what the Bush-Cheney administration has done to the system of checks and balances so crucial to our constitutional democracy.”

“Charlie Savage is one of America’s best reporters, and this is an incredibly important book. It’s absolutely must reading for anybody who cares about preserving our constitutional system of government and understanding how seriously that system has been threatened.”

“Savage has all the goods, with a real narrative flair and deep, factual detail that prompts alternate bouts of despair and rage at what has been done to American honor and the rule of law these past few years. Do yourself a favor: Read the book.”

“Charlie Savage has written an important and compelling book about the wide-ranging attempts-many successful-by George W. Bush’s administration to expand executive power radically. Every American concerned about the erosion of checks and balances in our constitutional system should read this book-and weep.”

“Anyone who believes in limited government needs to read Charlie Savage’s chilling account of abuse of executive branch power in TAKEOVER. Conservatives and others opposed to big government and absolute power will be astonished to read how so few have assumed so much power at the expense of constitutional checks and balances.”

“The best and most comprehensive” new book about “the way the Bush-Cheney administration — largely out of the public eye — has seized upon the war on terror to drive an unprecedented expansion in the powers of the presidency. … Considered in totality, the record is not just breathtaking; it is hair-raising.”

“A gifted reporter’s exposition of how and why the Bush administration has conducted itself and of that conduct’s disturbing legacy. … A meticulously reported and lucidly recorded account of the executive quasi-coup that is likely to be this administration’s domestic legacy.”

“The most important and frightening account of the construction of ‘the imperial presidency’ that I’ve read.”

“A solid and deeply troubling piece of reporting. Any readers who doubt that presidencies have become imperial should test their skepticism against it.”

“Dispassionate but compelling …presents explanations that have been previously missing in political discourse. … written clearly and documented meticulously.”

“Scrupulously researched … Savage concludes that Cheney and Bush will leave presidential powers enhanced at the expense of Congress and the courts, to the detriment of the checks and balances essential to our constitutional system.”

“In his illuminating and biting new book, Boston Globe reporter Charlie Savage shows how Cheney has emerged as Bush’s Richelieu, the most powerful vice president in history.”

“Charlie Savage, the author of ‘Takeover,’ depicts a presidency on steroids, pumped up by Vice President Dick Cheney. … He has a real gift for amassing detail so as to reveal the thread that connects separate news stories. Savage is particularly good on the subject for which he won a Pulitzer Prize: presidential signing statements.”

“Savage pulls together so many anecdotes in such a well-organized manner that all readers — Republicans, Democrats, Independents and nonparticipants — are quite likely to realize more starkly than ever before that Bush and Cheney have expanded presidential authority in several directions. Whether that is cause for rejoicing or alarm will depend on how each reader views the checks-and-balances provisions of the U.S. Constitution.”

“A serious and scathing indictment of the ‘hidden agenda’ of the Bush administration. … [Savage’s] account of information suppression, warrantless wiretapping, torture memos, treaty violations, detention, rendition, a compliant Supreme Court and a supine Congress should command the attention of American citizens concerned about constitutional checks and balances in an era of ‘perpetual emergency.'”

“Detailed … incisive analysis… adds up to a searing indictment.”