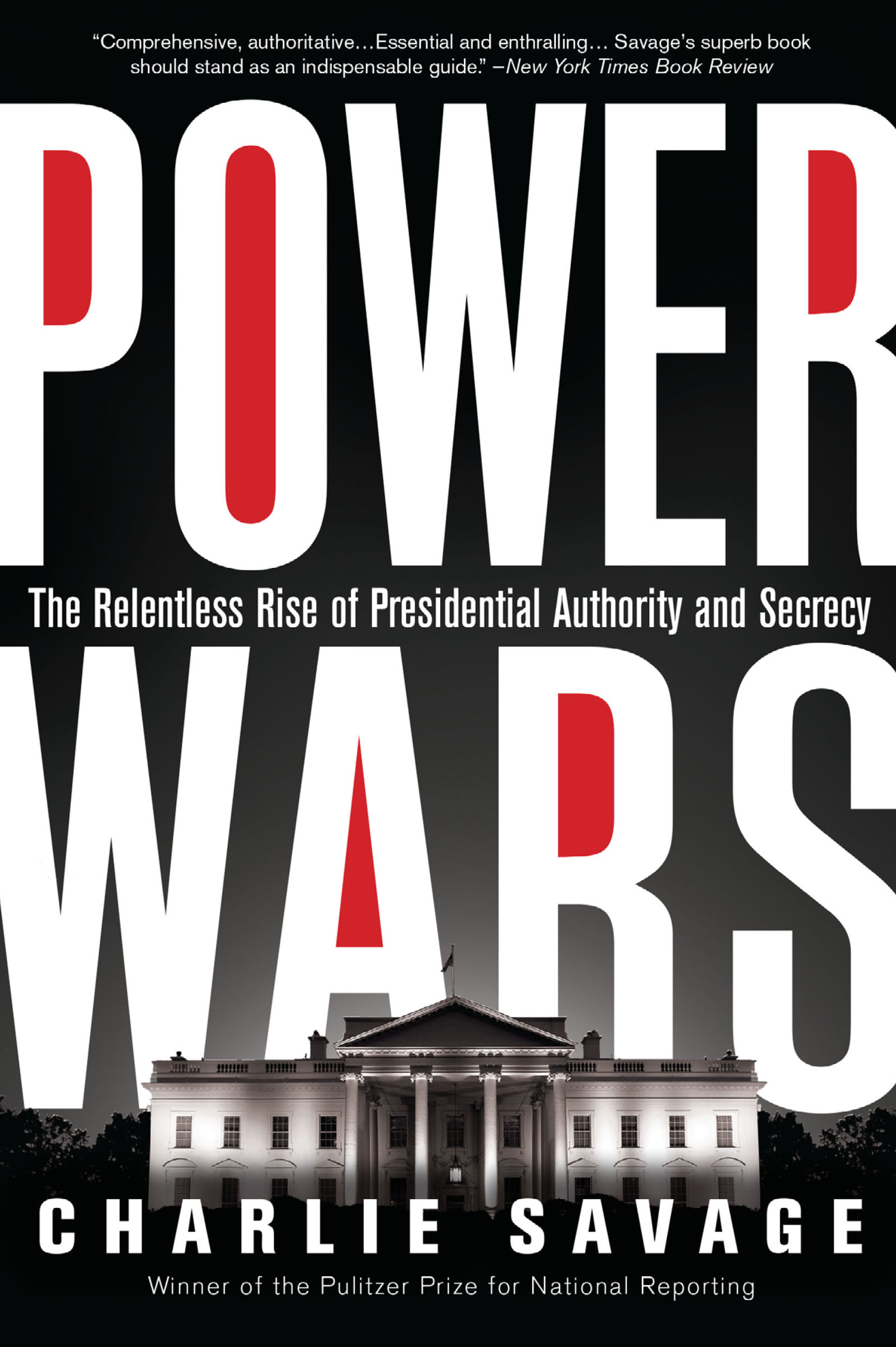 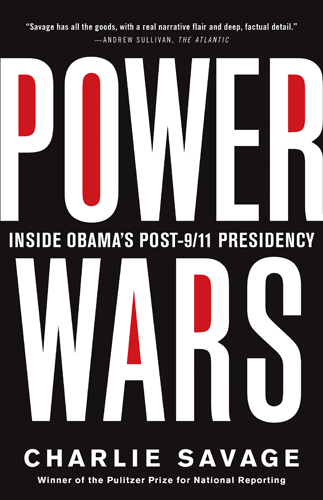 Barack Obama campaigned on changing George W. Bush’s “global war on terror” but ended up entrenching  extraordinary executive powers, from warrantless surveillance and indefinite detention to military commissions and targeted killings. Then Obama found himself bequeathing those authorities to Donald Trump. How did the United States get here?

In Power Wars, Charlie Savage reveals high-level national security legal and policy deliberations in a way no one has done before. He tells inside stories of how Obama came to order the drone killing of an American citizen, preside over an unprecedented crackdown on leaks, and keep a then-secret program that logged every American’s phone calls.

Highlighted by the first comprehensive history of N.S.A. surveillance over the past forty years and new information about the Osama bin Laden raid, Power Wars equips readers to understand the legacy of Bush’s and Obama’s post-9/11 presidencies in the Trump era.

Named one of the best books of 2015 by ABC News and The Guardian;

Power Wars  “offers a master class in how to think seriously about crucial aspects of the [war on terrorism]. … comprehensive, authoritative … anyone truly interested in foreign policy or national security should find it essential and enthralling, thanks to the author’s intelligence, objectivity, legwork and literary skill. …  Savage’s superb book should stand as an indispensable guide to the debate.”

Editor of Foreign Affairs and author of How Wars End, writing in the New York Times

Power Wars covers “in intricate detail nearly every major issue in Obama’s national security policy: detainees, military commissions, torture, surveillance, secrecy, targeted killings, and war powers. Its behind-the-scenes story will likely stand as the definitive record of Obama’s approach to law and national security. … His main interest is presidential power in its perennial struggle with Congress and the courts. Ultimately, the stakes are high: whether we will continue to have, in John Adams’s words, ‘government of laws, and not of men.'”

writing in The New York Review of Books

Power Wars “will almost certainly stand as the most comprehensive account of the Obama administration’s policies, views, theories and bureaucratic battles over national security laws and the legacy of the 2001 attacks. His account is thoughtful and consistently fair-minded.”

Power Wars “offers a unique and thorough history of the American surveillance policy post-9/11, the inner machinations of the executive branch at the highest levels, the legal battles, the battling personalities, and the strange evolution from Bush to Obama in this critical area of law and policy … As one who has studied and written about the Snowden phenomenon, I can’t imagine a better, more total and fair inside history of that dramatic event.”

editor of  After Snowden: Privacy Secrecy and Security in the Information Age, writing in Washington Lawyer

Power Wars “is the most essential explanation of modern-day American national security policy. … After reading it, I came away with one (fairly obvious) conclusion: keeping the republic safe is hard and crazy complicated. Anyone who has followed current events on drone strikes, surveillance, and encryption, and other essential issues at the forefront of modern America—and wants the entire inside baseball play-by-play to go with it—will love this book.”

“This key insight and hundreds of other juicy vignettes are on full display in Charlie Savage’s blockbuster 769-page tome … the book has much broader appeal than to those in the national security law bubble…This is not a typical book written by your “average” Pulitzer Prize-winning author.   …[Deeply sourced] is an understatement, as Savage reveals the contents of never-before released documents, memos, and internal deliberations across a variety of topics.”

“Over the years, Savage has become one of the most knowledgeable and tireless reporters chronicling the civil liberties and war powers controversies under the Obama administration. … Savage has written a book that will clearly be the comprehensive historical account of these controversies. .. Its most valuable contribution is the access Savage has to some of the key legal and policy officials responsible for these decisions, and the book thus provides a full account of their thinking and self-justifications. That makes his book simultaneously illuminating but also infuriating.”

The Intercept and author of No Place to Hide

“His book builds considerably on his earlier reporting to present a rich blow-by-blow account of how and why the Obama administration determined the legality of its war-on-terrorism policies.”

The Intercept and author of No Place to Hide

“Extending to nearly 800 pages, Power Wars delves deeply into the nooks and crannies of every significant national security debate touching on the intersection of national security and law. The product of prodigious research and interviews with seemingly every player, Savage’s book provides a revealing picture of the inner workings of the Obama presidency. From the wealth of material assembled here, one could readily construct a withering indictment of Barack Obama’s handling of national security matters. But constructing such an indictment is hardly Savage’s purpose. Quite the contrary: If Savage hangs out a great deal of team Obama’s dirty laundry, he does so not to disparage the administration but as part of a cleansing process.”

The Weekly Standard and author of Necessary Secrets

There is “no more comprehensive guide to today’s debates over national security and civil liberties than Power Wars.”

“… a unique book that combines deep behind the scene reportage with lucid legal analysis. A hundred years from now, I believe that Power Wars will be the first book that legal historians pick up when trying to understand the Obama administration’s national security legal policy.”

“The New York Times’ Charlie Savage is an accomplished journalist who has reported and written extensively on national security legal issues. In Power Wars, he has produced a comprehensive account of how the Obama administration has managed these issues in the post-9/11 era. It is hard to imagine many journalists capable of writing a book on this topic on the scale, and with the ambition, of this one.”

“The value that Savage brings to his book is in reporting out how Obama’s lawyers, who were often the toughest critics of Bush when they were out of power, wrestled with and ultimately sanctioned this retrenchment.”

“Both the most comprehensive and the most engrossing look at how Obama morphed from a candidate beloved by the civil liberties community into what many saw as a continuation of George W Bush (as well as a good argument that, in fact, he didn’t change much at all). … this book could not be more timely.”

Power Wars “brings together and builds upon the reporting he has done over the past six years into one single remarkably informed, detailed volume that offers an unparalleled look into the national security lawyering establishment under President Obama.”

“The most comprehensive account to date of the Obama administration’s approach to national security law and policy-making. … Carefully documents key decisions while placing them in context of politics, personalities and ideological agendas … This book’s rich account of how and why Obama reached his decisions therefore contributes to the potency of his legacy.”

“In its comprehensive treatment of the steady expansion of surveillance and erosion of privacy in the United States, Power Wars offers a damning account of power and those who wield it. … In his exposition of Stellarwind, Savage is at his best [with much] that is new and warrants further attention. … Offers penetrating insight into a political system that has become disconnected from the values that animated the Founders.”

“Charlie Savage’s new — and quite excellent — book reads as a vindication of the decision to go to law school.”

“A comprehensive collection of primary-source materials for reflecting on the most profound questions about the role law does and should play in areas, such as national security and the use of force internationally, where policymakers perceive some of the most compelling national and international interests to be at stake. …. arresting chronicles of specific decisions… [a] rich book.”