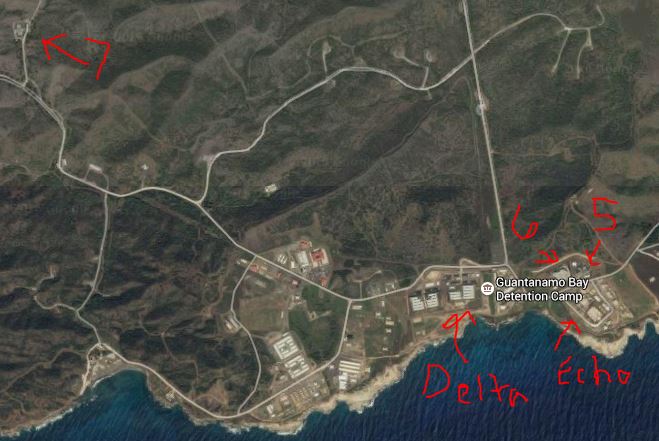 Today I read on TechCrunch that Google had figured out a way to make its satellite maps clearer, and checked Camp 7 of the Guantanamo Bay wartime prison, where the “high value” detainees who were formerly held in the Central Intelligence Agency’s black-site prisons are kept. They include Khalid Shaikh Mohammed and the other four 9/11 defendants, as well as Abu Zubaydah (the first prisoner to be waterboarded), Abd al-Rahim al-Nashiri (U.S.S. Cole defendant), and eight other men. Although I did not save a version of the image before, I’m pretty sure its resolution is indeed now clearer. I’ll make screenshots this time to preserve it for news value/comparison purposes, in case the website changes, and discuss what we can see.

First, for context, the military and intelligence community drape Camp 7 — marked on the military’s “for official use only” maps of the base as an “intelligence operations center” — with security theater. Journalists who visit the prison complex have been able to walk through Camp 5 and Camp 6, where lower-level detainees are held, but the military’s press handlers will not talk about Camp 7 – not even where it is located. In 2014, when James Connell, a defense lawyer for Ammar al-Baluchi, another defendant in the 9/11 military commission case, went to inspect his client’s cell, the military blocked out his van’s windows and drove him in circles before taking him there. (Al-Baluchi’s defense team is currently asking a military commissions judge to order the military to let the United Nations’ special rapporteur on torture visit Camp 7, a motion that I estimate has approximately zero percent chance of being granted.)

Despite all this, as I periodically have pointed out when feeling snarky/exasperated, anyone who looks at Google Maps in satellite view can see Camp 7, up in the hills about a mile northwest of the main prison complex. And now, unless I’m mistaken, we can see it a bit more clearly. So what can we see?

First, in the shot at the top of this post, I’ve marked the location of Camp 7 in the upper left hand corner. In the main complex area I’ve also marked Camps 5 and 6, along with Camp Echo (where detainees meet with their lawyers or live apart from the general population just ahead of their release), and the old, largely disused Camp Delta (which consists of now-empty Camps 1 through 4, but is still used to house prison library books and a hospital area).

Here is the closest view we can get of Camp 7: 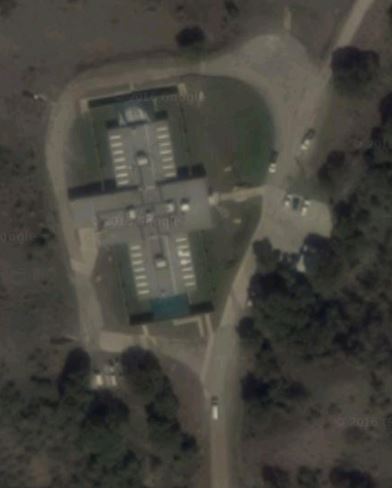 You can see that it has a central control area with two blocks, each of which has two outdoors recreation yards surrounded by high green tarp walls. That’s basically a smaller version of how Camps 5 and 6 work, and comports with a rare public description of Camp 7 from a military report in 2009: 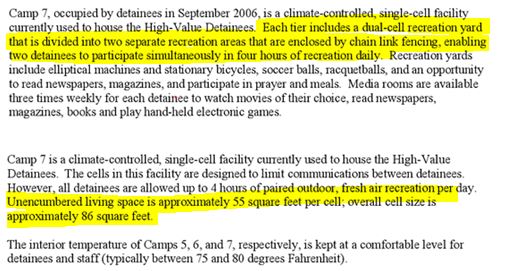 There’s a parking area to the east, and a path to the entrance that includes what looks like maybe a small walkbridge over a dry streambed. In 2013, Southcom wanted $49 million to build a replacement building because Camp 7 was built on unstable ground–a dry streambed that sometimes was not so dry, it was said–and its floors were supposedly buckling; that funding request was rejected.

Now, earlier this month, in a military commission hearing, Gouled Hassan Dourad, a Somali detainee who lives in Camp 7, described, among other things, how it is divided between two tiers called Alpha block and Bravo block. He also said each cell has something called a “Charlie area” at the back where detainees can get fresh air and communicate by shouting at each other, and which have roofs. Maybe those white areas are roof coverings for the fenced-in “Charlie” recreation areas? The Charlie areas may be new since 2009: they were not described in the 2009 report, which “strongly” recommended increasing “detainee-to-detainee contact in Camp 7, including the ability for detainees to communicate with each other from within their cells.” Dourad also said “pinholes” were opened since 2009 that permitted more socializing. Here are the relevant excerpts from the transcript of that testimony: 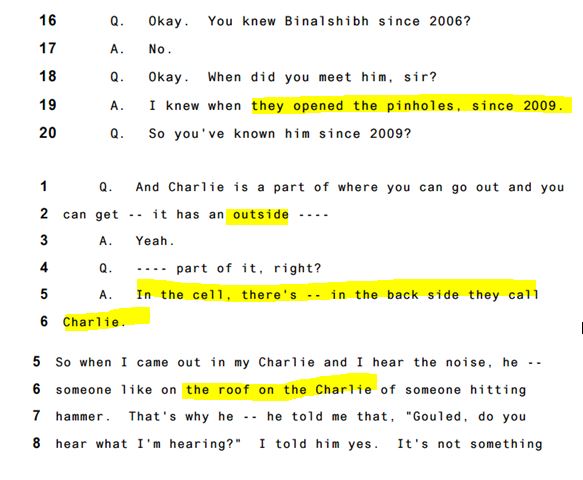 (Update: Carol Rosenberg told me she thinks he actually said “beanholes” — as in the slots in the steel doors — and his accent threw off the translators. She also noted that there is also a reference to the Charlie areas in this court filing:

Back to Google Earth, it looks like there is a second perimeter fence encircling this area at some distance — a couple hundred feet to the west, but nearly 1,000 feed of scrub to the east. There also appear to be some small sheds or structures in a fenced-off adjoining yard that I’ve marked with a question mark. (This is purely a guess, but perhaps they are kennels for dogs used to patrol the perimeter? Or entrances to bunker cells used to house Camp 7 detainees during hurricanes?) 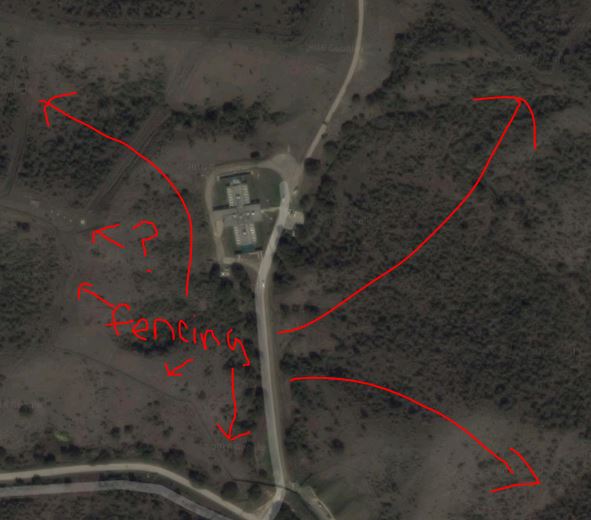 And at the southern edge, down by the road, it looks like there’s a security gate vehicles have to pass through to get up to the parking lot area: 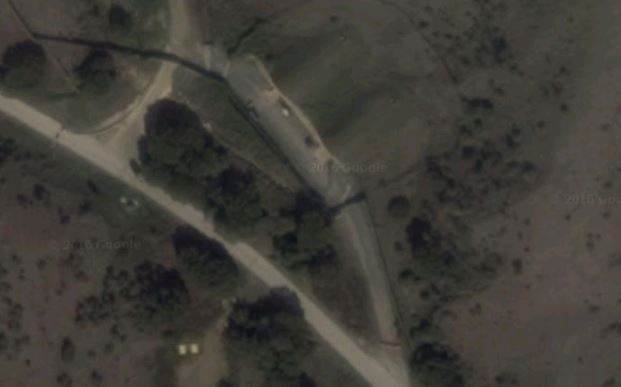 So, that’s a tiny bit of transparency for Camp 7. Thank you, Google.

Looks like the satellite imagery has been swapped again. In the currently available version the white roofs that may be the open-air Charlie areas at the back of the cells are less contrasty. The ground is much more brown than green compared to the last version, suggesting this was taken during the dry season, so maybe they are just covered in dust. 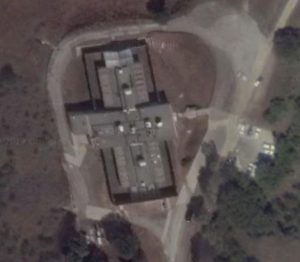 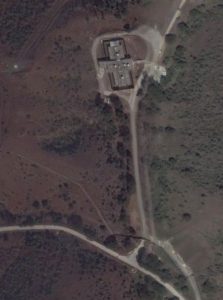 The Guardian reported today (based on a discovery by Nathan Ruser) that a global data visualization map released by the fitness appmaker Strava, using GPS data uploaded from users wearing fitness trackers when jogging or otherwise moving around, revealed information about military bases around the world.

Most of those insights came from seeing where Western people were, such as intense jogging circles around the perimeter of what must be forward operating bases in Afghanistan. But looking at Strava’s presentation of Gitmo with data for both jogging and driving toggled on, the insight comes from the opposite: a striking gap in the stretch of the road (called “Central Magazine Road” I think) on either side of the turnoff to Camp 7, where nobody wearing a fitness tracker is going.

It looks like one of the security measures is to make even the approach to the turnoff to Camp 7 a no-go zone for most military personnel. Otherwise, that stretch of road would be heavily traveled, since it is the most efficient route between the main detention complex to the southeast and the main base development area to the northwest, near the ferry landing. 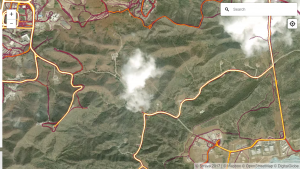 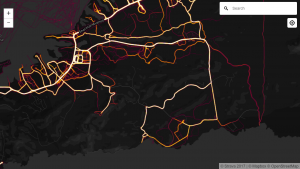 Power Wars provides “a master class in how to think seriously about crucial aspects of the [war on terrorism]. … comprehensive, authoritative … essential and enthralling.”