Solving the mystery of Qwest, Joe Nacchio, and the February 2001 NSA “illegal” request

As a follow up to my pre-Thanksgiving blog post discussing some of the revelations in Power Wars about the invention and significance of transit authority for understanding surveillance, I thought I’d highlight a nugget that is buried in the endnotes. I found or figured out so much stuff in reporting out Power Wars that some had to be relegated to the back of the book. This is an example worth noting.

In 2007, a former Qwest executive, Joe Nacchio, who was being prosecuted for insider trading, alleged in court documents that the NSA had asked Qwest to do something illegal in February 2001, but he had refused. It wasn’t clear what this was about, and it led to a lot of confused and confusing reporting, including speculation that the Bush administration had been trying to start its surveillance program (the New York Times had by then exposed the content component of Stellarwind, and USA Today had written a slightly garbled article about what now know to be the bulk phone metadata component) even before 9/11 — despite publicly justifying its program as a response to the terrorist attacks. Here is representative coverage from the time in Wired, The Washington Post, and my future colleagues at The New York Times; citing these articles in his endnotes, James Bamford later recycled some of these glimpsed-through-a-glass-darkly claims in what I believe to be an errant paragraph in his otherwise excellent book The Shadow Factory.

This reporting tended to project what we knew at the time about Stellarwind onto the vague words in Nacchio’s court filing. But the idea that Bush and the NSA were pushing this long before 9/11, indeed just a month after the change in administration, never really made any sense, and none of the post-Snowden revelations has corroborated that theory. The problem was that we did not have all the puzzle pieces to correctly identify what we were looking at. Now that we understand what transit authority is and its pre-9/11 history, a much simpler explanation presents itself, one that fits with, rather than contradicts, everything else we now know. Here is my endnote: 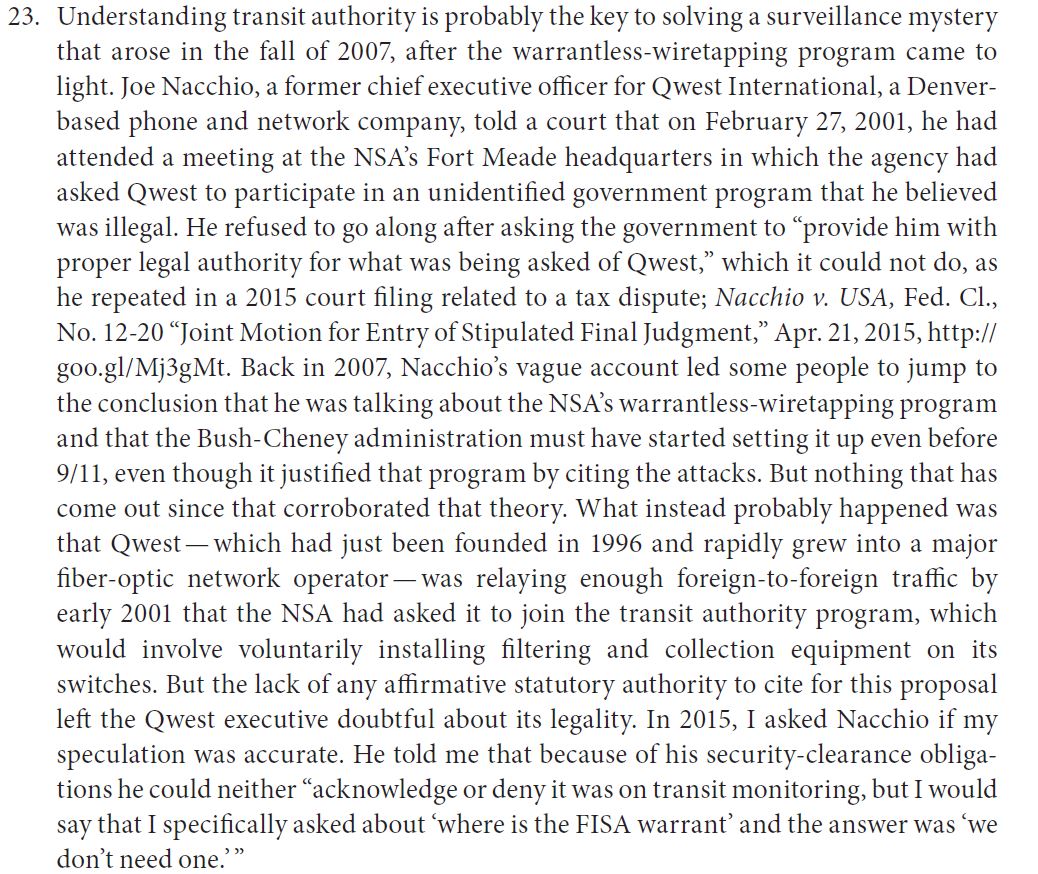 If you are interested in stuff like this, and haven’t yet picked up a copy of Power Wars, I encourage you to do so!

Power Wars provides “a master class in how to think seriously about crucial aspects of the [war on terrorism]. … comprehensive, authoritative … essential and enthralling.”